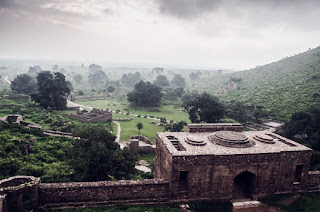 The Bhangarh Fort (Hindi/Rajasthani: भानगढ़ दुर्ग) is a 17th-century fort built in the Rajasthan state of India. It was built by Man Singh I (one of the navratnas of Akbar's court) for his younger brother Madho Singh I. It was named by Madho Singh after his grandfather Man Singh or Bhan Singh. A new village of Bhangarh with a population of 1,306 in 200 households has developed outside the limits of the fort. The fort and its precincts are well preserved. 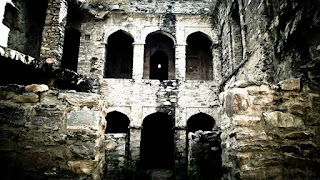 The Bhangarh Fort is located on the border of the Sariska Reserve in the Aravali range of hills in Alwar district of Rajasthan. The nearest village is Golakabaas. The fort is situated at the foot of the hills on sloping terrain. The ruins of the King’s palace are located on the lower slopes of the hills; trees surround the pond area and a natural stream falls into the pond within the premises of the palace.
The fort is located 235 kilometres (146 mi) from Delhi and the approach to the entrance gate of the fort in the last 2 kilometres (1.2 mi) stretch of the road is an unpaved road. The fort is 20 miles (32 km) from Thana Ghazi. 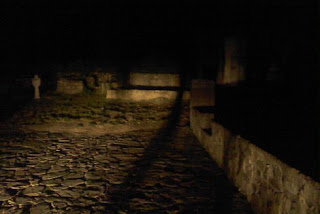 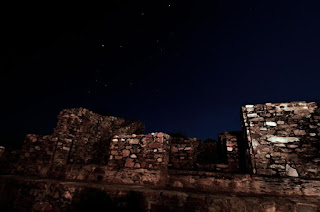 Exterior of Bhangarh Fort
There are two legends narrated to the history of the fort city, which is reported to be haunted, and no one is allowed to remain in the precincts of the fort at night, per a notice board put up by the Archaeological Survey of India at the entrance. One version of the legend is that a sadhu named Baba Balak Nath lived within the fort area. It was his injunction that any houses built in the precincts of the fort should not be taller than his house, and if the shadow of any such house fell on his house, it would result in destruction of the fort town.
In another version, N.K. SINHAI, the wizard who was adept in black magic fell in love with Ratnavati, the princess of Bhangarh who was very beautiful and had suitors to marry her from many royal families of the country. One day the princess, 18 years of age, went shopping with her friends and was buying Ittar (scent). The wizard saw this and replaced the scent with a love potion in order to ensnare the princess. He offered the potion to her so that she would take a liking to him and marry him.However, the princess saw through the wizard's trickery, and when he offered her the bowl of potion, she threw it onto a big boulder nearby. As a result, the boulder started rolling down towards the wizard and crushed him. Before he died, he cursed that Bhangarh would be destroyed soon and no one would be able to live within its precincts. Subsequently, Bhangarh Fort was invaded by the Mughals from the north and the city was surrounded and sacked; 10,000 people lived in the fort city at that time. All the people in the fort, including the princess, were killed. The present state of the fort is attributed to the curse of the wizard and people believe the ghosts in the fort are that of the princess and the wizard. 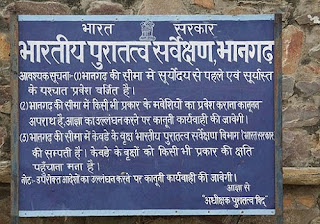 Entering through the main gate of the completely ruined fort city, one can find temples, palaces and havelis. In addition, there are four more gates of entry to the fort – the Lahori Gate, the Ajmeri Gate, the Phulbari Gate and the Delhi Gate. At the entrance of the main gate, are many Hindu temples such as Hanuman Temple, Gopinath Temple, Someshwar Temple, Keshav Rai Temple, Mangla Devi Temple, Ganesh Temple and Navin Temple.The Gopinath Temple is built above a 14 ft raised plinth and yellow stones are used for the exquisite carvings of the temple. The residence of the priest called the Purohitji Ki Haveli is located in the precincts of the temple complex. Next in order is the Nachan Ki Haveli (dancer's palace) and Jauhari Bazar (market place) followed by the Gopinath Temple. The Royal Palace is located at the extreme end of the fort’s limits.
The temples dedicated to Hanuman and Shiv Mahadev are built in the style of cenotaphs rather than temples. Jhirri marble has been used in their construction but presently covered by white wash. The Muslim tomb found outside the gate of the fort is reported to be that of one of the sons of King Hari Singh.

Many Stories Provide Evidences Of Paranormal Things In Bhangarh Fort

Although, the fort is regarded as a haunted place and is restricted during the after-hours, curious minds always try and witness something strange. Such is a story of two young guys from the neighboring district of Bhangarh, who decided to spend a night in the fort but never made a returned home. Similar to the tragic incident, a guy decided to visit the fort during the night with lighting equipment, but fell in a steep well located in the middle of the fort. Although he was rescued immediately by his friends, while he was being rushed to the hospital, the car got crushed in an accident and all three died on the spot. Even the locals observe the existence of supernatural powers in the area as real and believe that they stay protected due to the blessings from their gods for whom several temples have been built in the area.

The advisory “Stay Away” notice by The Archeological Survey of India

The mystifying architectural ruins of Bhangarh Fort has a deep rooted connection with various legends and myths in the areas around the fort that are actually true to a great extend as per the locals. These myths attract tourists, ghost hunters, scientists from different corners of the world to witness something paranormal. Therefore, The Archeological Survey of India has placed an advisory notice board near the fort mentioning it as a strictly prohibited area and the place will remain closed after the sunset till the sunrise. In case people are found trespassing the forbidden region trespassers will have to face strict legal actions under the archeological act of India.

One of the most popular legends with Bhangarh Fort is the curse by Guru Balu Nath. Long before, King Madho Singh decided to establish his fort in Bhangarh, the area was the samadhi spot for Guru Balu Nath. The Emperor got the permission from Guru Balu Nath on a condition that the shadow of emperor’s palace shall never touch him at his forbidden retreat. In case the shadow pats over his place the city will be turned into ruins. The emperor started with his fort construction and with his strength and wealth, the fort mounted more stories and finally shadowed the forbidden retreat of Guru Balu Nath. As per the prophecy, the whole town was ruined and ever since then any house build in or around the cursed area faces a roof collapse.

content from internet.
written by:- VIKASH RANJAN
Posted by smiling singing success at 05:40